Back to Toni Schönfelders homepage

Toni Schönfelder A lifetime of innovation

Toni Schönfelder
A lifetime of innovation

Toni Schönfelder
A lifetime of innovation


Figures indicated that Latvias center-right had won a comfortable general election victory Sunday 2002.10.06 , though under new leaders, as the former Soviet state prepares to enter NATO and the European Union.

"We can now almost certainly say that we are the winners," a beaming Repse said. "We will cooperate with other right-wing parties, but it is yet to be decided which ones."

New Era was followed by the only leftist party to make it into parliament, For Human Rights in a United Latvia, at 18.9 percent, while the conservative Peoples Party got 16.7 percent.

"My main worry was to see to it that lefties do not come to power, and I can be quite proud as I was betting on the winner," said Sanne, 22, a shop assistant.

Prime Minister Andris Berzins Latvias Way was the big loser in Saturdays election, with preliminary results showing the party had failed to get the 5 percent of votes required for entry to parliament.

"We have, it seems, completed our stage of the road and many want us to pass on the baton," said Latvias Ways Ivars Goedmanis, the countrys first prime minister after independence.

Recent infighting in the center-right bloc could make coalition talks difficult, although most parties seemed willing to let Repse take the lead in the bargaining.

"All parties have agreed that Repse should form a government," said Zaneta Ozolina, a politics professor and commentator.

A broad center-right coalition will ensure Western market reforms are kept firmly on course in the small Baltic state, which regained independence in 1991.

Many voters were dissatisfied after a decade of exhausting reforms and voted Saturday for new leaders to wrap up the last stage of Latvias "return to Europe."

Repse has lashed out at friends and foes alike for what he sees as an inefficient and corrupt state system drowning in red tape. In his campaign he stressed the need for lean government and tax cuts to keep Latvia moving forward.

Opposing the center-right bloc in parliament will be the leftist For Human Rights in a United Latvia, which often speaks on behalf of the sizeable Russian minority.

Another successful newcomer to Latvian politics was the Christian Latvias First Party, with 9.6 percent support.

The last two parties to get above the 5 percent threshold were the centrist alliance of Farmers and Greens, with 9.5 percent of the vote, and the right-wing For Fatherland and Freedom, part of the current coalition, at 5.3 percent.

Latvia has been a minefield for party politics since its first free elections in 1993, with a short life expectancy for those at the helm. Three elections have produced nine governments.

But they have all been center-right and provided the stability necessary for a country in rapid transition.

Latvian President Vaira Vike-Freiberga has urged stability above all as Latvia, which has a buoyant economy, makes its final preparations before joining NATO and the EU.

Latvia, along with Baltic neighbors Estonia and Lithuania, expects to join the EU in 2004 and to get an invitation to enter NATO at a Prague summit next month after a decade of reforms. 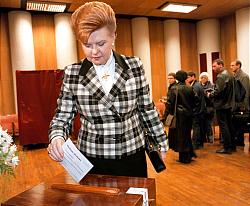 Advertising about Spain
All kind of information about Spain in my own web page http://www.spaininformation.org

The Toni Schönfelder Newsletter and website contains copyrighted material the use of which has not always been specifically authorised by the copyright owner. The material is being made available for purposes of education and discussion in order to better understand the complex nature of corruption in today's world. I believe this constitutes a "fair use" of any such copyrighted material as provided for in relevant national laws.

The material is distributed without profit to those who have expressed an interest in receiving the included information for research and educational purposes. If you wish to use copyrighted material from this site for purposes of your own that go beyond "fair use", you must obtain permission from the copyright owner. Toni Schönfelder cannot guarantee that the information contained in the Corruption News service is complete and correct or be liable for any loss incurred as a result of its use. Nor can Toni Schönfelder be responsible for any subsequent use of the material.

This page has been produced by Mr Toni Schönfelder. The sender does not take any responsibility for the contents of the linked pages. The whole material in the own produced page can be used free of charge.